Jim is back, fired up and full of information. We cover the below topics for an hour and a half session.

Has the Financial & Trade War Turned into a Hot War?

Jim says, definitely yes. Tianjin, China is the most strategic business, tech, info and database center in the nation. The explosion was certainly the result of an attack, among other connections between currency devaluation events and violent explosions (see Bangkok). One item of intrigue is that the devaluation of currency means USD lifted higher, and much like a balloon pops if it rises too much (from pressure differential). The devaluation trend will catch fire, and accelerate the USDollar death spiral. RMB devaluation started a trend, sure to result in Competing Currency War. USGovt and USFed masters do not want USD to be given an accelerant booster rocket.
END_OF_DOCUMENT_TOKEN_TO_BE_REPLACED

Original content from Survival Blog
By Will Lehr of Perpetual Assets

The following story takes place during late summer in south central Texas. As I battle the humidity by sipping on a margarita on the San Antonio river walk, I wonder if the air can get any thicker without precipitation. It is Friday night before a family wedding. We dine together, the bride’s family and the groom’s family. I am a member of the former. The night before, the bride– my sister– had prepped me for the meeting with the family of her hubby-to-be. I was warned the future in-laws were very “politically active.” That is code for, “Will, don’t ruin my wedding with talks of our nobel peace prize drone king, civil liberty erosion, the role of government, …” So, I sip my margarita, while biting my tongue. However, as the margarita flows, as does the liquid courage impeding that internal filter as alcohol acts as a form of truth serum.

As the conversation moves to the subject of gun control, my tongue apparently wins the battle with the cerebral cortex of my brain. I interject, “Why should I need permission from a state or regulatory body to responsibly bear arms?” As I passionately discuss the role of self regulation in a free market, the faces turn blank. Most alive today have never experienced a truly free market. I have, however, studied the intricacies of free markets and understand the concept of self regulation. I believe the good in humanity self regulates the bad, if allowed. When I contend that giving away the mildest of liberties only leads to the forceful theft of the greatest of liberties, I remember perhaps my favorite Thomas Jefferson quote, “I prefer dangerous freedom to peaceful slavery.” Life is dangerous my friends, and it should be. We should not fear danger, we should embrace it, as “fear is the passion of slaves,” as I quote from Patrick Henry. Without danger we would not understand its cause and effect, and we would not experience that precious thing called self regulation.
END_OF_DOCUMENT_TOKEN_TO_BE_REPLACED 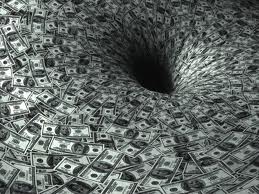 Rather than stimulus, the USFed’s Quantitative Easing is a death sentence for the USDollar. It might provide an ongoing backdoor bailout opportunity for Wall Street banks, and even a window for China to switch from long dated to short dated USTreasurys, but QE is death sentence. It guarantees that the USDollar will be removed from the global premises and placed in the dustbin of history. Foreign banking systems are largely devoted to USTBonds as the foundation for their entire reserves system. The African type of hyper monetary inflation blessed as good and fine stimulus is a sentinel signal by the US Federal Reserve itself, given to the Eastern producing nations who save in the $billions. They will start a caravan to exit the USDollar in their banking systems. They have great challenges in doing so, and must follow a prescribed path. That path is the Chinese RMB as an intermediary device, a transition tool. The goal is the return of the Gold Trade Standard, which will assure the return to the Gold Currency Standard and the Gold Banking Standard. The absent solution to the chronic global financial crisis has been the refusal to put Gold at the apex. Instead, the big banks have become zombies, the economies have become sclerotic, the financial structure have been control rooms, the bond platforms have been fracturing, while the USGovt has relied upon bond fraud, gold thefts, the printing press, and predatory wars to defend the King Dollar regime. It is due for the funeral pyre.

QE FACTORS
The QE initiatives are backfiring, adding incentive to the financial markets in a sick distorted manner, but at the same time killing the USEconomy from capital destruction. It has an equally destructive macro effect on the global economy. The USD is wrecking the world economic and financial system, even while the Petro-Dollar delivers equally powerful blows from its dismantling to the contract net foundation. The macro effect from QE is seen in hedging against the USD which is subjected to the African monetary policy. To praise it as adaptive and effective is intellectually criminal and abominable. Ironic that the White House has an African resident, and the USFed has an African monetary policy, and the USMilitary has hidden interests at the African Horn in Djibouti. But the Chinese have an African gold connection through Congo to Dubai and Hong Kong in return through the lower route on the distress road. The macro QE effect urges Eastern nations to divest USTreasury Bonds in favor of Gold bullion, mineral deposits, even energy deposits. The higher cost structure has killed working capital and put it on the sidelines, the retired capital concept that escapes the view of Western economists, mostly hacks and banker pimps. The Eastern nations also have embarked in numerous large capital projects, often called infrastucture deals. It is all hedging, diversifying, abandoning, done in preparation.
END_OF_DOCUMENT_TOKEN_TO_BE_REPLACED